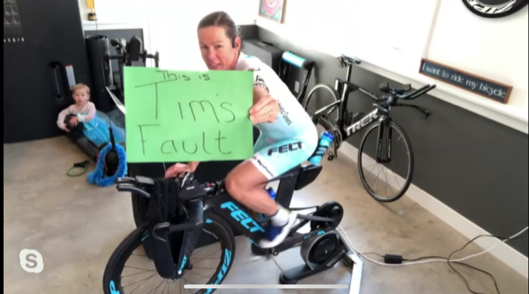 Every athlete who had a race planned during the Spring of 2020 had a wrench thrown into their plans with the outbreak of COVID-19, and the ensuing shutdown of… well… everything.

For an A-type triathlete training for an Ironman, whether it be their first or their 50th, it was a huge blow. In the grand scheme of things, certainly there are more important things to worry about right now than getting our collective neoprene on. Still, It’s understandable that a sense of tremendous loss is felt when a set of very exciting goals are suddenly ripped away.

Fortunately for us triathletes, we’re resourceful. It’s as if we’ve prepared for this very scenario, and right now with programs like Zwift, Strava, Facebook Live, and others, it’s never been easier to be social while training indoors… but where would racing fit in?

Enter Ironman Virtual Club, the platform to host virtual racing, or the “VR” series as Ironman calls it.

Ironman held its first virtual race this past weekend (VR1), a 70.3 equivalent race with a 5k run to start, 56 mile bike, and 13.1 mile run to finish it off. Athletes would have three days to finish the total distances.

As with anything Ironman, the race seems to have been met with mixed reviews. Some were vocally peeved by the… um… let’s call it a “lack of accuracy” of bike splits, which is understandable. I mean, a 1:32 half Ironman bike split is just not happening unless it’s done on a Harley Davidson. Others praised Ironman for putting on a pretty darn good show on short notice.

I didn’t participate in the race this past weekend, but I still fall within the latter camp. While I often experience frustration with Ironman for some of their activities, I have to hand it to them on this one. They stepped up in a crisis and within just a couple weeks delivered a very good “free” (for now) product which gave people a sense of accomplishment. Sure, we can’t rely on accurate results as of yet, but it’s a giant leap in the right direction, and something to build upon.

Let’s face it, for those of us who are endurance junkies, we need a new finish line right now. When our goals are stripped from us, a void is created and that void will be filled with something. That something could be an unhealthy habit, or it could be another empowering goal. Ironman has established something that at least gives their loyal following something to remain engaged in the sport.

While the amateur racing keeps the “mortals” active, the pro race is another exciting element as well. I never would have thought watching someone ride a bike trainer would be entertaining, but announcers Michael Lovato and Dede Griesbauer kept it exciting, as did the performances of the athletes and their avatars. Seeing Tim O’Donnel inadvertently sabotage his wife’s (Marinda Carfrae) chances of winning the race by tripping over her plug was the highlight of the day.

Certainly there is room for improvement. My hope is that there will be some consistency with regard to how it’s structured. Right now it feels like a bit of a free for all where everyone can jump on in any platform and any course profile they want. This obviously skews the results considerably. It doesn’t help that Ironman posts a “leaderboard” as if there is any validity to it at all. If anything, that decreases the credibility.

Ideally they can structure the amateur races more like the pro races, where everyone is on the same platform and same course racing side by side. Adding validation protocol that allows athletes to certify their weight/calibration would help also. The result would be more accurate results. Again, it’s still early, and it takes time to work out the kinks.

In a day and age when there is so much that is out of our control, and far more restrictions placed upon us, the Ironman VR series is a great opportunity to stay motivated and engaged. I’ll be racing this coming weekend!